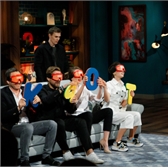 M.I.R., the Russian production company run by The Eurovision Song Contestproducer Andrei Boltenko, is to produce a 12-part run, known as Celebrity Game Night, to air later this autumn.

The deal marks the 21st international version of the format, which was originally created by actor/producer Sean Hayes, producer Todd Milliner and Mission Control Media and is in its sixth season in the U.S. with host Jane Lynch.